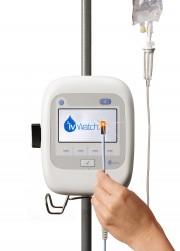 ​The ivWatch Model 400 will improve patient safety through early detection of IV infiltrations and extravasations and provide a new option for IV therapy.

Hampton, VA, April 5, 2016 (Newswire.com) - Medical device manufacturer ivWatch, LLC today announced United States availability of the ivWatch Model 400, a device that continuously monitors a patient’s IV for the early detection of infiltrations – when medication or fluid leaks outside the vein into the surrounding tissue.  Peripheral IVs (PIVs) are one of the most common invasive medical procedures performed with over 150 million IV catheters placed in the U.S. annually.  Yet, current medical reports peg the failure rate of IVs in excess of 20% due to infiltrations.  The ivWatch Model 400 was developed to address this unmet need in health care.

The ivWatch Model 400 represents a new option for medical professionals – a continuously monitored IV – that can allow peripheral IVs to be an appropriate alternative for infusion therapy that can reduce costs, risk, patient harm and medication dosing errors.  The ivWatch Model is the result of more than 16 years of intensive development and clinical testing. The FDA cleared the device for use in 2015.

“It’s like a seatbelt,” said Warren. “Since it’s difficult to predict when an accident will occur, people wear their seatbelt for the duration of their travel. Similarly, since it’s difficult to predict when an infiltration will occur, and we know it occurs too frequently, the ivWatch Model 400 represents a seat belt for patients with an IV. Our continuous monitoring device not only improves patient safety, but can help minimize the risk and avoidable costs for health care provider organizations.”

The device includes a non-invasive sensor that uses visible and near-infrared light to detect changes in the optical properties of the tissue. The sensor is coupled with a highly intuitive, pole-mounted patient monitor.  The device will notify clinicians if conditions suggest an infiltration, allowing them to address the issue early to help reduce patient harm.

Please contact Melissa Fire, Vice President of Sales, at sales@ivwatch.com or 757-817-9040 for information on pricing and evaluation opportunities.

Get notified about new releases.